For some reason, a lot of Michiganders are vastly impressed with non-Michiganders who venture to the Upper Peninsula. I don’t know if we strike them as especially hardy or just exceptionally rare, but really, all you have to do is pay four dollars to cross the Mackinac Bridge. In any case, PJ and I took the plunge last week and drove from Grand Rapids to Whitefish Point, on the eastern tip of the state in the U.P., on Lake Superior’s Shipwreck Coast. It’s the home of the Great Lakes Shipwreck Museum, which I had heard about from a docent at another museum in Lansing when I was working there in the summer and which caught my imagination. The Great Lakes have seen an estimated 6000 shipwrecks, and 300 of those have been in an 80-mile stretch starting from Whitefish Point. A combination of bad weather and unfortunate geography in the form of reefs and narrow channels combine to make this area particularly treacherous for ships. The most famous of these, and the last shipwreck on the Great Lakes, was the Edmund Fitzgerald, which went down in an unexpectedly vicious storm on November 10, 1975, 17 miles off Whitefish Point.
The bell of the Edmund Fitzgerald is on display in the museum, as part of a memorial dedicated to the ship. As part of its mission, the museum owns an underwater research ship, and almost 20 years after the ship went down, museum staff were approached by family members of the Fitzgerald crew, asking them to try to raise the bell in an attempt to gain some sort of closure. The ship had sunk in Canadian waters, so they had to get permission from the Canadian government for any sort of recovery attempt. The Canadians not only gave permission, they also furnished a ship for any family members who might want to observe the operation, and National Geographic loaned a special suit that allows a diver to work for up to eight hours at a stretch. The bell was brought up on July 4, 1995, and another bell, inscribed with the names of the 29 crew members who had perished, taken down and set on the wrecked vessel in its place. A treaty between the American and Canadian governments established the site of the wreck as a memorial to remain undisturbed. The original bell, cleaned and polished, is now on exhibit at the Shipwreck Museum, but I felt OK about that, and OK about taking pictures of it, when I learned that it was brought up at the families’ request. There’s a private memorial service every year at the museum on the anniversary of the wreck and according to staff, it’s become a lot more cheerful since the bell was raised. 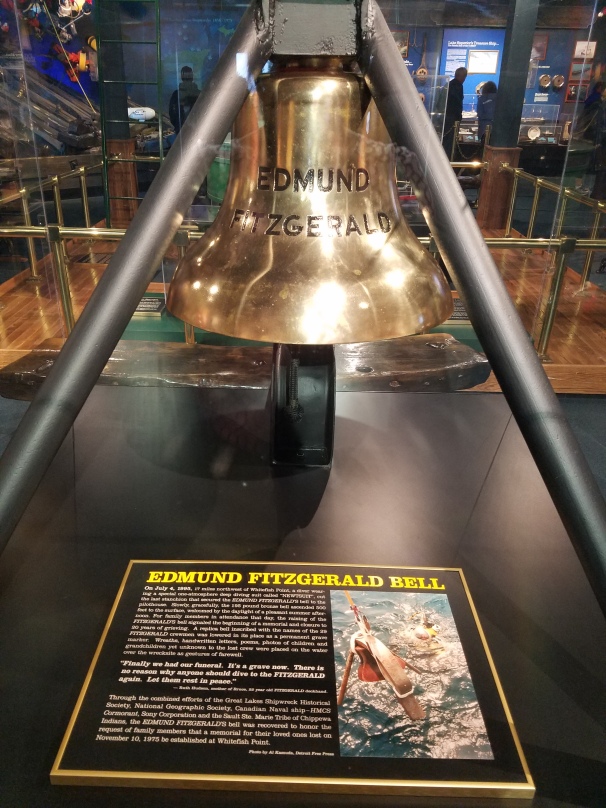 We stayed on the museum grounds, at the restored Coast Guard Crew Quarters, which is now a bed and breakfast. The breakfast isn’t the gourmet kind, it’s the serve-yourself-cereal-bagels-microwave sausage biscuits-fruit-muffins-yogurt-juice-etc. kind. This works out very well, as the nearest other food is in Paradise, 11 miles down the road, where there aren’t a whole lot of restaurants and some of the ones that are there close in the early evening. It’s nice to have handy snacks in a pinch. We spent three nights at the Crew Quarters. For a type A person who has to be on the go every minute while on vacation, three nights in kind of a remote location, surrounded by vast areas of no cell phone coverage, and miles from the nearest McDonald’s, three nights at Whitefish Point might be a little too much of a good thing. Thank goodness we’re not type A people. We had a great time. Besides the museum and the oldest active lighthouse (now, alas, just a light tower) on Lake Superior, they have a theater that shows a movie about the raising of the Fitzgerald bell, the restored home of the lighthouse keepers and their families, and the surfboat building, plus a separate bird observatory. We visited all the buildings, walked on the beach, read and relaxed, and drove to Tusquamenon State Park to see the Falls.   The Upper Falls are among the largest east of the Mississippi.  I wasn’t prepared for the color; the water has a lot of brown due to tannic acid. 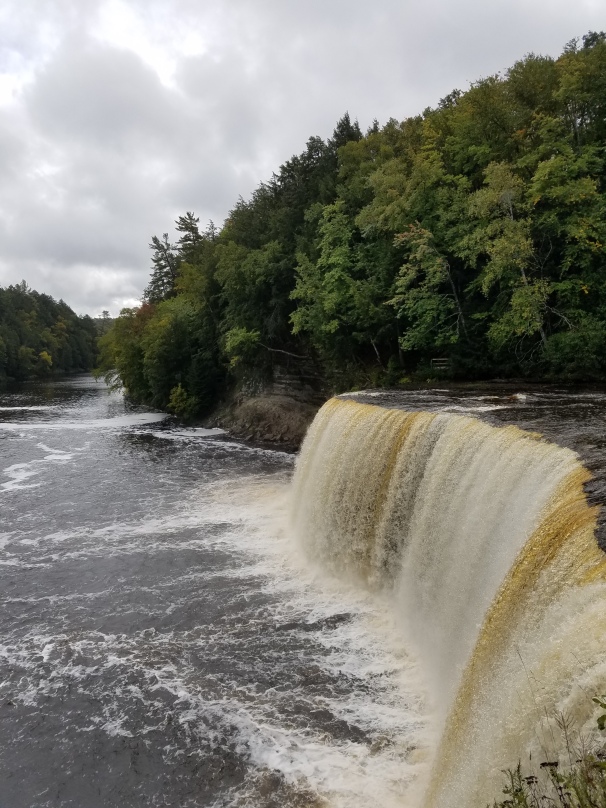 One thing that we hadn’t originally planned to do was look for Yooperlite rocks, because we’d never heard of them until some other guests at the Crew Quarters told us about them. They visit Whitefish Point several times a year, but the main point of this trip was to look for Yooperlite rocks, a newly discovered type of rock found only in the Upper Peninsula. (“Yooper” is someone who lives in the U.P.) Some combination of minerals makes parts of the rock glow under a black light. The other guests went out after dark to look for the rocks on our second night and showed us the rocks the next morning, and I asked them if we could go with them that night, when they were planning on going out again. They had bought black light flashlights at a hardware store in Grand Rapids, where they lived, and we decided to try to find our own lights so we wouldn’t have to ask them to share theirs. We found out exactly how popular Yooperlite rocks have become, and also how helpful the locals are. The first store we went to didn’t have any black lights, but the guy told us he heard that the 76 station with the broken sign by the Lower Falls at Tusquamenon State Park had some. We headed over there and the woman behind the counter had sold her last two that morning. (“You’re looking for those rocks, aren’t you?”) She said the hardware store in Newberry might have some and offered to call for us, because cell phones are pretty useless in that part of the U.P. The store in Newberry had two left and said they would hold them for us, and we drove to Newberry and I gave my name and she pulled them from under the counter. (“We’ve been selling a lot of these. Everybody’s looking for those rocks.”) We didn’t find any Yooperlite rocks that night but we had a good time hunting and I saw a gorgeous moon over the lake that I wouldn’t have seen otherwise. Judy (from Grand Rapids) wanted to give me one of hers but I refused. It’s probably just as well we didn’t find any. PJ and I are trying to get rid of stuff, not bring in more, and it must be admitted that we had already picked up a few rocks on our daytime beach rambles. (We of course checked those with a black light, as Yooperlite rocks look perfectly ordinary in regular light.) I intended to sleep in the next morning but woke up early out of habit. It was the only clear morning of our stay and I made myself get out of bed. Sunrise may be a trite subject for photography but there’s a reason for that. 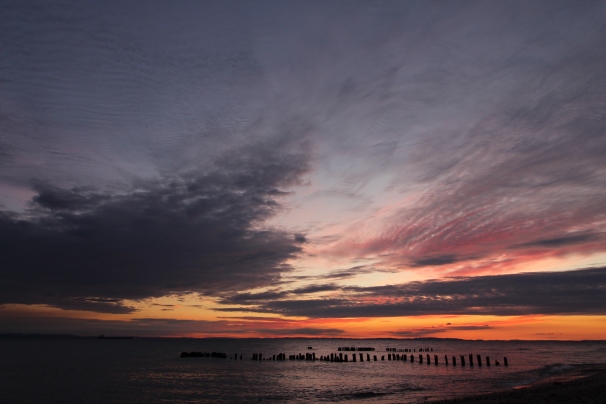 The keepers’ house is restored to the time of Robert Carlson, who served as the lighthouse keeper from 1903 to 1931. Though isolated, Whitefish Point was one of the light stations where keepers’ families were allowed, and Mrs. Carlson made them an extra $10 a month by running the attached weather bureau. During the summer of 1918, Carlson was assigned a 2nd assistant keeper who, he came to realize, was a German spy attempting sabotage. (They didn’t say how Carlson knew.  I guess the other guy wasn’t a very good saboteur.)  He discreetly summoned the authorities and the spy and his wife were arrested. The wife was a little snarky about the whole incident, as evidenced by her screaming and cursing at everybody in German as they were both taken away in handcuffs. On another occasion, Mr. Carlson received a commendation when he risked his life taking out a skiff in gale force winds to rescue eleven people from a steamer that had capsized in front of the lighthouse.
I had never heard of surfboats before this trip, but they were the workhorse of the U.S. Lifesaving Service, a forerunner of the Coast Guard. The boats were manned by six to eight oarsmen and could take on up to eleven extra passengers. The surfboat was designed to handle easily so it could avoid wreckage in the water, and only the keeper, who steered it and gave the orders to the oarsmen, could see what they were getting themselves into. (Good idea there.) The boats had handholds on the keel in case they capsized. Other tricks the surfmen had up their sleeves were a wagon that the men could harness themselves to (they couldn’t find a horse crazy enough) and drag down the beach for ships that ran aground, and a sort of cannon thing that would shoot a line to a foundering ship, with instructions in French and English about where to secure it, so that people could be transferred off. There was also a giant enclosed metal capsule to transfer several people at a time if this needed to be done quickly.  They might have been able to persuade me to crawl into the thing by reminding me that the only alternative was drowning. Seriously, though, the surfmen sound like they were incredibly brave and hard working. They didn’t just sit around waiting to be called about a shipwreck, they patrolled the beach looking for them. And, since black lights weren’t invented until 1935, they weren’t distracted by looking for Yooperlite rocks. 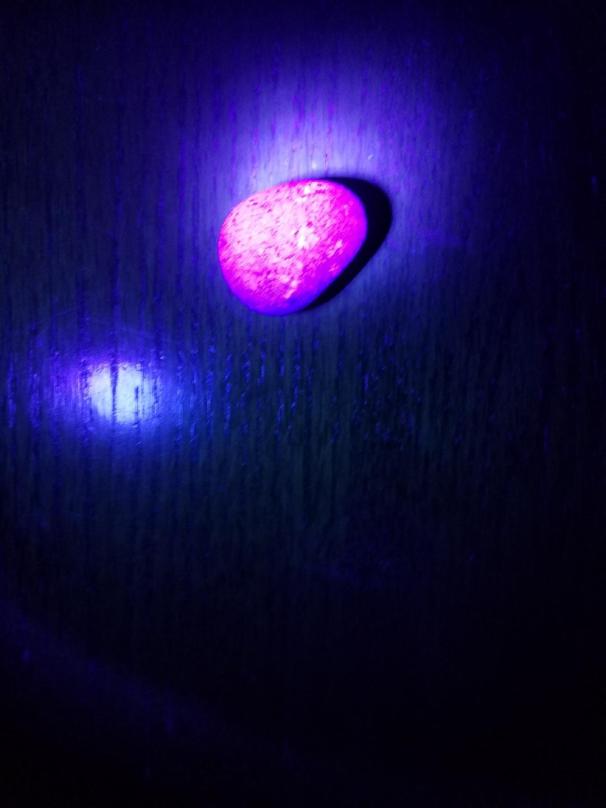 Yooperlite Rocks Under a Black Light