I’m sometimes asked what my favorite ever vacation was. That’s really hard to say, because I’ve taken some absolutely wonderful vacations to some incredible places. They’re all memorable for something, generally several somethings. If I had to pick one that stands out, it would probably be one that PJ and I took a number of years ago, to southern Germany. It had everything we like to do: big cities with their museums and rich history, charming villages, scenic drives with beautiful vistas, great food, and hiking in the mountains. When those mountains just happen to be the Alps, and you’re hiking there for the first time, it’s hard to express just how awesome that feels. One evening in Stuttgart, we wandered around in light jackets, eating fantastic banana and Nutella crepes, made fresh by a street vendor. The fact that Germany was wrapped around them no doubt contributed to the flavor. A week later, we tramped through four inches of snow to tour Neuschwanstein Castle and the less well-known Hohenschwangau.

It’s Rothenberg I want to talk about in this post, Rothenberg ob der Tauber (on the Tauber River), to be precise. We might have missed this medieval town altogether if a friend of mine hadn’t mentioned it when we were planning our trip. It’s the best-preserved walled city in Germany, so it naturally follows that it has a lot of tourists, but it’s lovely nevertheless. If you close your eyes and try to picture “quaint German town” it’s likely you’ll envision something that has the flavor of Rothenberg.

We had a car, the possibility of which nobody took into account 800 years ago and which made getting to our hotel particularly challenging as the streets are narrow and shared by cars, tour buses, pedestrians and cyclists. (The tour buses are especially scary.  It’s a good thing I’m not a European bus driver as there are a lot of places I’d be stopping the bus and telling my passengers to get off and walk the rest of the way.)  We set a personal record in how fast we got acquainted with the main drag as we drove down it three times, entering one city gate, driving through looking wildly for the right turn, exiting another city gate, circling around and starting all over again. On round one we were completely overwhelmed. On round two I spotted the hotel but it was too late for PJ to turn and there was no way to go back. Round three still didn’t quite get us there, so we decided to park outside the city and find our bed and breakfast on foot, which proved to be an excellent idea, and then we retraced our steps backwards and were able to drive there.

By sheer luck we got a free parking place right by our B & B, although it didn’t happen immediately or without incident. Space in a walled city is precious. We initially parked in a designated space to unload our bags, put a couple of euros in the meter and honestly thought we were all set for the afternoon, but after coming back a couple of hours later (from the Christmas shop I’ll talk about) a traffic cop was writing us a ticket. Our euros had, it seemed, bought us 15 minutes, so we were probably lucky that there wasn’t already a ticket on the car. To make a long story short, PJ managed to talk his way out of the ticket by pointing out how much we had just added to the local economy, but judging by the look on her face, tearing up tickets wasn’t something she did with pleasure, especially for a couple of lousy stinkin’ freeloaders like us. We put more money in the meter to buy some time and were discussing how to support our car for the next couple of days when the owner of our B & B pointed to a space, off the street and right by his establishment, that wasn’t actually a designated parking spot. It also wasn’t marked with a “No Parking” sign. This meant that there was no meter and no law against leaving a car there as long as we wanted to. I’m not sure why and we didn’t care, but magically, there was a space big enough for two cars to park side by side that had to have been the only undesignated car park in all of Rothenberg. We moved the car and left it there for the duration of our stay. The town isn’t that big and we walked everywhere we wanted to go.

If you ever go to Rothenberg, be sure to climb the wall and walk at least part way around the city. Walking is one of the best ways to get to know a new city and this is certainly an interesting variation on a theme. It’s only a couple of miles to do the whole thing and there are frequent staircases where you can descend to street level if you see something particularly intriguing and want to explore further. You’ll get some great views of the town. Along the way, don’t forget to turn around and look at the wall itself once in a while. It was, after all, the business side. Looking out the arrow slits is much less threatening now. You’ll also see plaques of companies and individuals who have made donations to restore and maintain the wall. We saw one of a couple from Fairhope, Alabama, which gave us a warm fuzzy feeling.  We also climbed to the top of the rathaus (town hall), which offered us some magnificent views.

Plaque on the Rothenberg City Wall

PJ on the Rothenberg Wall. He was cold but happy.

From the Rothenberg City Wall

View from an Arrow Slit

The clock tower on the town hall has an unusual display at the top of the hour. You can see two mechanical men drinking out of beer steins. This is to commemorate the town’s most popular legend, of the time a mayor bravely and unselfishly saved the city using nothing but his wine-drinking prowess. During the Thirty Years War, when the town was threatened with invasion and subsequent razing, the mayor and council of Rothenberg supposedly offered the leader of the opposing forces, the Count of Tilly, a 3.5-liter stein full of wine in hopes of making him a little less aggressive. Who knew it was that easy? In any case, he made a bet that if any of them could chug the entire contents of the stein, he would spare the town. The mayor took him up on it and in a feat of wine drinking that has been the envy of college freshmen ever since, he did it. Three days later, he woke up with the worst headache of his life but to find that his beloved city had been spared! Although this story is almost certainly not true, it’s still valuable for tourism, as the throngs of people gathered to watch the clock tower drinking contest every hour can attest.

While in town, you have to eat a schneeball (snowball). This is a specialty of Rothenberg. It’s a more or less round, fried pastry concoction that you can buy with assorted toppings. Eat isn’t exactly the word I’m looking for. Attack might be better, or perhaps conquer. Get the idea of a funnel cake out of your mind. These suckers don’t give in easily. You’re going to have to whack it a while, or maybe find a strategic opening with your knife, before you can sample it. Once you get inside, it becomes somewhat easier, and the experience is well worth it. If you don’t feel up to tangling with a schneeball, you can always indulge in the German tradition of “kaffee und kuchen” (coffee and cake) which they eat in the afternoon, like an English tea.

Another experience that’s well worth it is Christmas ornament shopping, if you do Christmas at all. PJ and I don’t ordinarily buy a huge number of souvenirs, but one thing we always actively search for is Christmas ornaments. We try to pick up at least one on every trip. When we decorate our Christmas tree, as we take out the travel ornaments, we remember our travels and talk about the places we’ve been. Some places it’s easier to find ornaments than others, like the trip we took to New York in December a few years ago. Macy’s had plenty of stuff to choose from. The best Christmas shop I’ve ever been in, hands down, is Kathe Wohlfahrt in Rothenberg. We were there for a couple of hours and didn’t see everything, but a lot of our time was spent narrowing down our options so that someday we could afford to take another trip someplace.

This is just a sampling of what Rothenberg has to offer. We were only there a couple of days and, as with most places I’ve been to, I’d love to go back, and maybe I will sometime. There are always other places I’ve never been that I want to see, though. It’s such an interesting world. 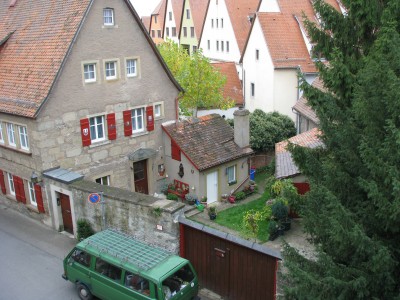 View from the Rothenberg City Wall

From the Town Hall 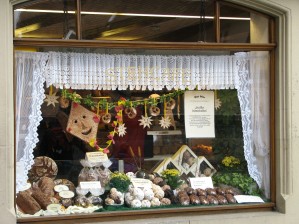 So many schneeballen, so little time

Another View from the Town Hall

2 comments on “Of Drinking Contests, Schneeballen, and Parking Tickets”