It's the hard knock life. 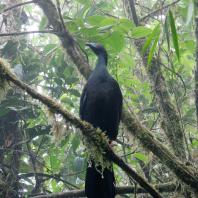 Look up, down or sideways but never straight ahead

Can you find the frog?

I always think of Costa Rica in April. PJ and I traveled to that spectacularly lovely country in April a few years back. It worked out well for us; April is the end of the dry season, which means it’s also the end of the high season, and for the most part the things we wanted to do weren’t that crowded. In fact, we were the only two people on a tour of the Santa Elena Cloud Forest Reserve. The Reserve is close to Monteverde, in northwest Costa Rica. The area was founded by Quakers from the United States who were the first to set aside land for conservation. The Reserve is now government-owned and is managed by students from local high schools. The cloud forests are at high altitude and get a significant amount of moisture from the tropical trade winds that bathe them in an almost constant mist that keeps them damp even during the dry season. They get about four meters of moisture a year, and one meter of that is from the mist.

Being the only two people on a tour suited PJ and me perfectly as we were able to walk quietly with our guide, Orlando, and not scare the wildlife. We could also linger where we wanted to and ask as many questions as we wanted, and as usual, we had plenty. The trails are clearly marked and you can wander around on your own but this is a site that I would strongly recommend seeing with a guide, unless you’re really familiar with the flora and fauna of the area. We would have enjoyed it either way but without someone who knew the forest intimately, we would have missed 90% of what our guide was able to point out. Orlando is in the forest almost every day so he knew, for instance, where a flycatcher had been hanging out. We paused on the trail in a good spot for a couple of minutes and waited until the bird appeared. As we walked the trails, Orlando told us about the ecosystems of the cloud forest, using whatever we happened to come across as examples. It was absolutely fascinating.

This is the place to go if you want to see beyond the forest to study a single tree. A cloud forest is so rich with life that each tree becomes its own ecosystem. If you want to turn your focus away from flashy mammals and concentrate on searching for a frog camouflaged in leaves, this is the place for that. And if you believe that this sounds boring—well, I hope I can convince you otherwise because I will remember this place for the rest of my life even if I never return, and I hope very much to return some day.

We did see a coatimundi but he was the only large mammal we spotted. Orlando knew it was a “he” because the females and young live in groups while the males live alone, leading the life of swinging bachelors, or maybe lonely bachelors. Who knows what a coatimundi is really thinking?

We spotted lots of different birds—Costa Rica is a birders’ paradise—especially hummingbirds, but plenty of others. We actually found the nest of a green hermit hummingbird that day. Orlando could tell from her behavior that she was heading back home, so we waited and watched until she got there, and we looked through binoculars and got some good pictures of her on the nest. They make a nest under a broad leaf so they’ll have a roof, and they use a spider web to wrap the nest for extra strength. The spider doesn’t usually object because they start the proceedings by eating it. I’m sorry to say that, not being a birder myself, I don’t remember the names of most of what we saw. There was some kind of tanager and a black guan, which Orlando said was pretty rare and which PJ got an excellent photo of. I’ve posted it if you’re interested.

What I found most engrossing were the tree murderers, or as they’re called by the less imaginative, strangler figs. Birds eat the figs and their droppings land on the branch of a tree, which is rich in nutrients and moisture. A new fig tree starts growing from the tree branch both up to the light and at the same time to the forest floor and its branches gradually surround the host tree. Eventually, it becomes rooted in the ground and it begins to strangle the host tree, which can die and rot, so the fig tree becomes hollow. You can climb up on the inside if you’re not claustrophobic, scared of the dark, or worried about what other creepy crawly creatures might be in there with you.  Needless to say, we didn’t climb up inside, and in our wanderings that day, we found the cloud forest to be a place of serenity and freedom.